We have a Victorian house that is about 115 years old that has a large wraparound porch. Some of the spindles needed to be replaced. Unfortunately, there are no companies in our area (the Upper Peninsula of Michigan) that still make custom spindles–it’s a lost art. After much searching online, I found several companies around the country and contacted them all to inquire about their interest and to get an estimate. The estimate from American Porch (in Montana) was neither the highest nor the lowest–we decided to go with them based on their prompt and courteous customer service. In fact, I later realized the person I spoke to initially on the telephone was the owner, Adam MacDonald. That personalized service, we learned, is a hallmark of this company. Adam and his crew helped us with getting the exact spindles we needed by creating a model based on one of our existing spindles. They kept us informed throughout the process, which was both on time and on budget. The end result is that the new spindles look exactly like the old ones, and now that everything is installed and painted, the entire porch looks beautiful and uniform. I highly recommend American Porch! Thanks for being there for us.

I was replacing spindles on a 100 year old porch and the homeowner wanted something that looked like the originals. The spindles arrives on time and were a very close match to the originals. The home owner was very happy with how the porch turned out.

Porch rail makes it! Will send wider shot of it once landscaping in. Thanks. American Porch and Adam were wonderful. They were very responsive, clear in their estimates and timely on delivery, not to mention great products. I cannot recommend them highly enough.
They look great. Attached are 3 pictures. They turned out great.

Here some before and after pics. The clients are very pleased ( you made me look good) and I am pleased as well. You were all very responsive and the service was great! Great product value if you are considering a lifetime solution for exterior millwork. They worked with us through an epidemic and a couple of minor product changes to complete our order in a timely manner. The product arrived exactly as advertised.

I ordered product to repair my porch.  The product was exactly what I needed and arrived undamaged and earlier then expected.  Thank You!

American Porch made my life one heck of a lot easier. Between turning and priming save a bunch of time and
time =$. Product was great and the clients loved the end results.
Thanks Adam for the great job.

Our porch is actually an enormous Grandfather’s Clock that we are creating for a museum. Your urn finials figure prominently (with a little modification).
There is also a giant wooden geared clock mechanism 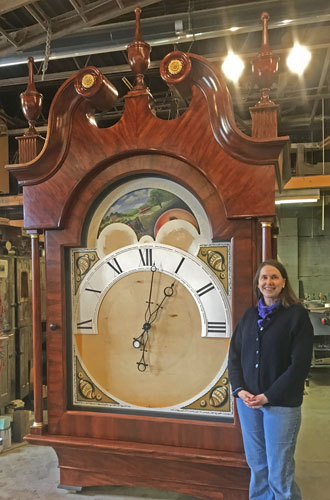